Summer is here and boy is it a hot one (literally)! I don’t know about all of you, but I’m on the hunt for good A/C wherever I go. In fact, maybe I’ll only take listings that have A/C this summer (just kidding)!! The market overall seems to be heading as expected, as more inventory comes on and prices still rise. Let’s take a look at some stats and see what we can decipher.

END_OF_DOCUMENT_TOKEN_TO_BE_REPLACED

Happy June everyone, and hope you’re surviving the heat! As expected, 2019 is shaping up to be an interesting year as we start to see the fruits of a pickier Buyer’s market. It’s definitely not time to panic, especially as median prices dip, but let’s see what kind of trends we’re watching as the first half of the year comes to a close.

END_OF_DOCUMENT_TOKEN_TO_BE_REPLACED

Happy holidays everyone! I hope you are finding yourself happy & healthy as we enter the end of 2016 and into 2017! I can’t believe this is my last post for 2016 already…these years fly by! Speaking of flying, November stats continue to show a “flying” real estate market here on the island, and it doesn’t look like it’s slowing down heading into December. Let’s take a look at the numbers… 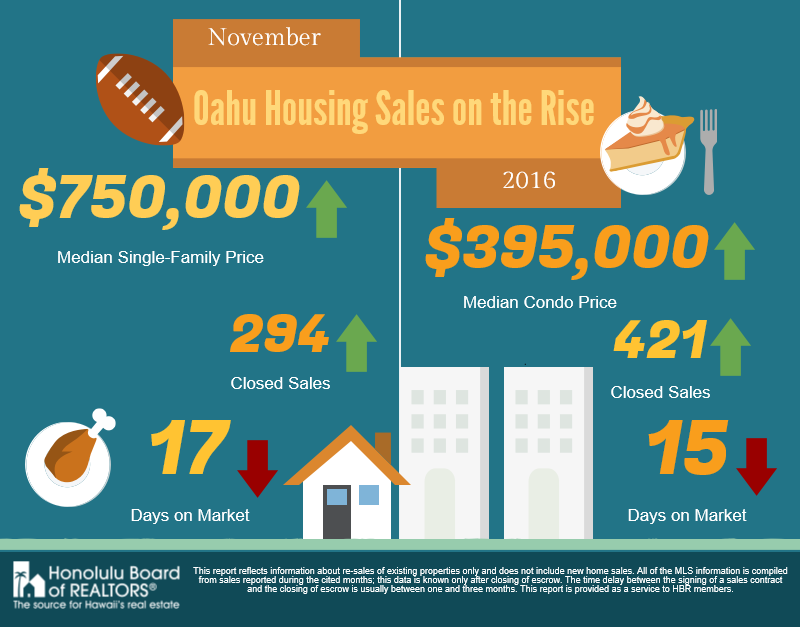 Yup, median prices are up, closed sales are up, and days on market are down. All signs continue to point to a strong Seller’s market, as inventory continues to fall. Some of the biggest changes occurred in the number of closed sales with both homes and condos up 19.5% and 17.6% respectively, over last year. We continue the trend in 2016 with more properties selling than coming on the market.

Condos also showed a 13.7% jump in median price over last year, while single-family homes rose 4.8%. In dollars, that’s roughly a $34,000 jump in homes and $48,000 in condos. I think the rise, especially in condos is due to more higher-priced units selling (due to the lack of inventory). The average sales price of condos sold rose 11.4%, which further enforces my feeling.

So what’s in store for December and heading into 2017? Well, it’s pretty obvious that low inventories continue to drive a competitive market here on O‘ahu. Properties are also selling faster despite the holiday season approaching, indicating that Buyers are still aggressively shopping in the market. It doesn’t seem like it’s slowing down any time soon!

I’ll continue to monitor the numbers, especially as President-elect Trump takes office. The Fed has already indicated a rise in bank rates next week, and possibly again through 2017 to offset inflation. Most experts are indicating a rise in mortgage rates to the mid-four percent range, so if you’re on the fence to purchase something, this may be a better time than waiting!

Hi Guys & Gals, I hope your holidays are kicking into gear and 2016 is finishing strong! The Kawakamis are all preparing for a busy season, and it seems that the market is following suit! 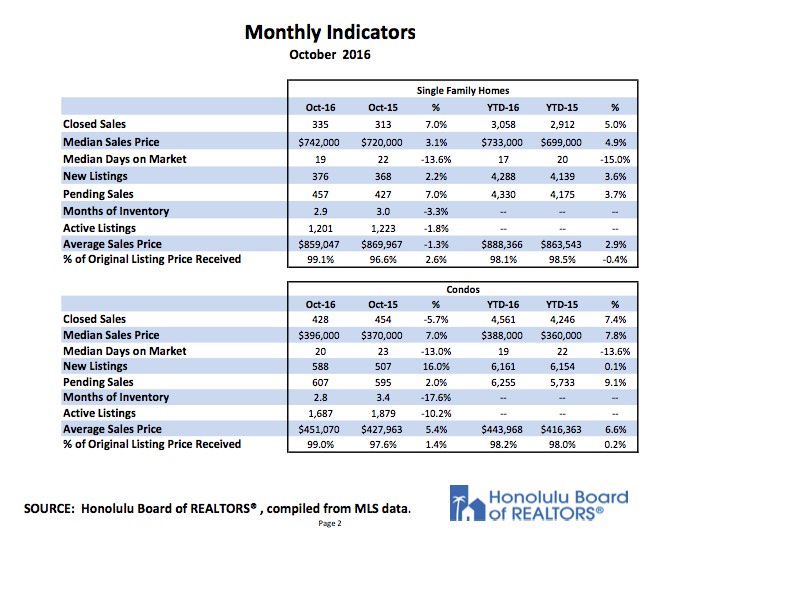 Homes, both house and condo, continue to fly off the market as inventories continue to drop and days-on-market fall. Median prices for condominiums increased by 7% over last year to $396,000, while single-family homes increased by 3.1% to $742,000. Days-on-market, the statistic that accounts for how long an available home sits on the market, dropped to 19 days for single-family homes and 20 days for condominiums. Considering these stats include the finicky multi-million dollar listings, it’s a really strong indication that things fly quickly!

So what does this mean for my clients, especially as we head into the traditionally-slower winter months? If you’re thinking about selling, there are still plenty of Buyers looking for a home. It’s my opinion that the shortage of housing throughout the summer months will give us a good group of healthy Buyers for the foreseeable future. For my clients looking to buy, there are still a lot of great opportunities, especially with these low interest rates. If you’re even considering purchasing something in the next couple of years, keep an eye on those interest rates! With a new president coming into power, and an sensitive bond market, it will be interesting to see how rates react.

Happy Thanksgiving everyone! Looking towards to the end of the year, I hope everyone has a safe holiday season!

“Prepare housing market for ludicrous speed! Fasten all seatbelts, seal all entrances and exits, close all shops in the mall, cancel the three ring circus, secure all animals in the zoo!”

It’s amazing to see prices continue to rise, but with limited inventory and uncertainty in the marketplace, it’s easy to see why. Elections? Low Interest Rates? Rail? Job market? There are a lot of reasons why people are looking to settle into a new home, and competition is fierce! 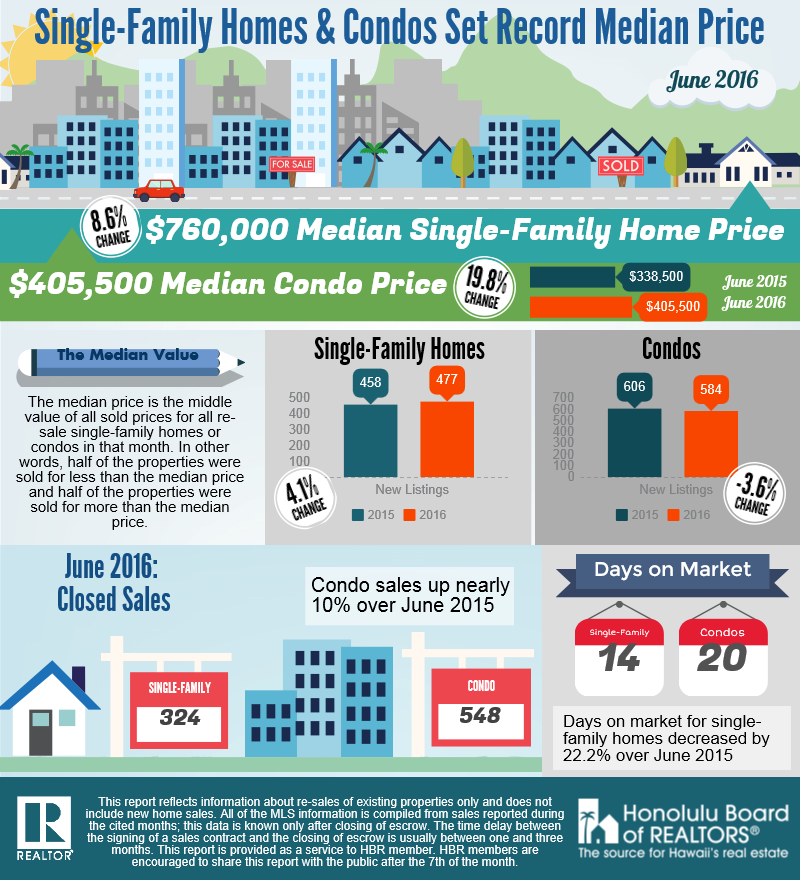 With only about 3,000 active properties on the entire island of O’ahu (condo & single-family homes), it’s no wonder that there is a lot of competition for buyers in the market. The market shows condos as the biggest gainer, possibly due to the squeeze down from high home prices. It may also be due to the fact that many of the Sellers coming from houses are taking advantage of the juicy market and opting to downsize. Either case, it will be interesting to see if this trend continues through the summer.

2015 finished strong in the local real estate market, with all indicators posting positive gains vs. 2014. END_OF_DOCUMENT_TOKEN_TO_BE_REPLACED

As is the standard for summer months, July saw another strong residential market. For today’s analysis, I take a look at the numbers overall for the island of O’ahu and answer the age-old question of “how much does being ‘in town’ matter for inventory?” END_OF_DOCUMENT_TOKEN_TO_BE_REPLACED

Here are your market statistics for Oahu during the month of June 2015. Let me know if you want to discuss your real estate goals, or just talk story! END_OF_DOCUMENT_TOKEN_TO_BE_REPLACED